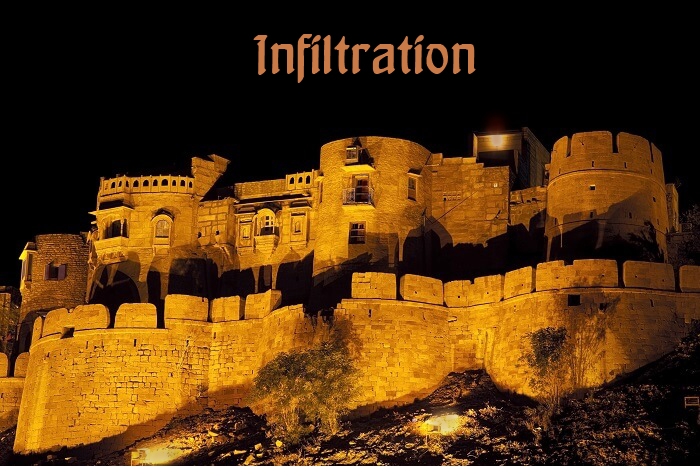 The command center of the enemy force was lavish but heavily fortified. Outside the walls, a lone messenger approached the main gate. Guards jumped to full alert, but only for a moment. They recognized the man who had been there just a few hours ago. A security team converged and questioned his return, but he offered no answers. He had come unarmed and empty-handed. The information he carried could only be delivered in a confidential briefing with the king himself.

As the door of the regal room closed behind him, the messenger approached the throne slowly. The king had granted a private meeting and was intrigued by this visitor’s request. A large man, he labored to his feet in anticipation of highly classified intelligence. The messenger drew close and uttered in a low voice, “I have a secret message for you… a message from God!” As the last syllable fell from his mouth, he tore a hidden dagger out from beneath his cloak. The king tried to cry out, but it was too late. The messenger swiftly vanquished the enemy ruler and escaped to the hills.

What may sound like a scene right out of Hollywood is actually found in Judges chapter 3. You can read the full, dramatic account of Ehud and King Eglon in verses 12-30. This is not the most heartwarming Bible story, and it doesn’t mask any “unfit-for-Sunday-School” graphic details. But the Lord put this story in His Word for a reason. So let’s look at some background that will help us understand and learn from this passage.

The events in the book of Judges began shortly after the Israelites finally arrived in Canaan, a.k.a. “the Promised Land.” After their arduous 40-year trek from Egypt, we might think the story should conclude: “and they entered the Land and lived happily ever after.” But that was far from the case. The next 350 years were a bleak and regrettable era, often referred to as “the dark days of the Judges.”

During that time, the Israelites repeatedly fell away from the Lord into idolatry. It was a cycle of sin and restoration that followed this simple pattern: Israel rebels; God disciplines; Israel repents; God delivers.

In Ehud’s time, God disciplined the wayward Israelites by allowing the nation of Moab to invade and control the land. Verse 12 says, “The Lord gave Eglon king of Moab power over Israel because they had done evil in the eyes of the Lord." Pagan king Eglon established his headquarters in Jericho, the “City of Palms” (v13). We all remember Israel’s earlier victory over Jericho, when God miraculously leveled the enemy city’s massive walls. Now another ungodly power had set up shop in the very place where God had given such an amazing victory to His people!

Along comes an Israelite named Ehud. What was so special about him? Perhaps his most interesting characteristic was simply being left-handed (v15). The original Hebrew text indicates that Ehud’s right hand was actually “impeded” or disabled to some extent. Now that doesn’t sound like much of an asset, but this detail would become important to the success of his mission.

When Ehud met with Eglon, the king seemed comfortable with the situation. This was Ehud’s second visit to the palace that day (v19), so maybe the repeat appearance was an infiltration strategy to gain Eglon’s trust by familiarity. Ehud may have also have secretly scoped out an escape route on the first visit. In any event, the king appeared to have no qualms about meeting with him in private.

We can assume that Ehud must not have been a very formidable character, and certainly not a perceived threat. A suspected assassin would not have been given the same treatment. It seems Eglon’s security team also failed to do more than a perfunctory pat-down of Ehud, as they left their king alone with an enemy packing an 18-inch dagger on his right thigh. Perhaps Ehud’s disability led them to believe he was completely unable to wield a sword. Or maybe they overlooked the possibility that a left-handed man would carry a weapon on the opposite side of the “usual” right-handed soldier.

Any or all of these ideas may have factored into Ehud’s very successful surprise attack. He caught the king so off-guard that he couldn’t even yell for help. This allowed Ehud to escape easily and rally the troops of Israel. With the Lord’s strength, they quickly defeated the Moabites. “So Moab was conquered by Israel that day, and there was peace in the land for eighty years” (v30).

Now with that background in place, what spiritual lessons can we gather from this story?

1. The Lord will help us maintain control of our “Jerichos.”

Back in Joshua 6, the city of Jericho had been a major obstacle to the Israelites in their goal of entering the Promised Land. It was an enemy stronghold with virtually impenetrable walls. Conquering and controlling this area seemed nearly impossible. But the Lord tore those walls down! With God’s help, Israel was able to move past Jericho.

Here in Judges 3, Jericho had once again become a major problem for Israel. It was the headquarters of the enemy – a stern reminder that those once-victorious areas in our lives can quickly become setbacks if we allow sin to regain control.

But in verse 15, “the Israelites cried out to the Lord, and he gave them a deliverer.” During the times of the Exodus and Judges, we see God’s grace and deliverance for the nation of Israel, despite their repeated shortcomings and rebellion. And He will do the same for us when we cry out to Him. The “Jerichos” in our lives – the areas of our biggest struggles – may hinder or even bring temporary defeat to our spiritual walk. But Jesus provided victory over all sin through his death on the cross, and He can give us great personal victory in our battles. Like Ehud, we may need to take decisive action to keep sin from infiltrating and gaining control in our lives, but the Lord will help us maintain control of the “Jerichos.”

“The weapons we fight with are not the weapons of the world. On the contrary, they have divine power to demolish strongholds. We demolish arguments and every pretension that sets itself up against the knowledge of God, and we take captive every thought to make it obedient to Christ.”
2 Corinthians 10:4-5

2. God can use your “differences” to His advantage.

Although God chose Ehud to heroically deliver Israel, it seems that he probably wasn’t the larger-than-life warrior type we see in the movies today. He may not have looked like a tough guy, but his actions were anything but weak-kneed. He crafted a double-edged dagger and secretly strapped it to his right thigh (v16), risking imprisonment or even death if it was discovered. His physical disability became part of his daring strategy when he surprised the opposition with deft left-handed swordsmanship. His remarkably bold actions led to the liberation of the entire nation of Israel.

Maybe you feel inadequate or inferior because of your "differences." Or maybe you think you’re just a very ordinary person. But remember, what we perceive as a disadvantage can become a unique advantage for the Lord! We may think God can’t use us because we’re insecure, tongue-tied, unpopular, physically challenged, too young or too old… etc. But what we see as a liability, God sees as an asset. God can use your “differences” to His advantage, as He works everything out according to His plan. Remember Ephesians 2:10 – “We are God’s masterpiece. He has created us anew in Christ Jesus, so we can do the good things he planned for us long ago.”

Isaiah 40:28-31 – “The Lord is the everlasting God, the Creator of all the earth… He gives power to the weak and strength to the powerless… Those who trust in the Lord will find new strength. They will soar high on wings like eagles. They will run and not grow weary. They will walk and not faint.”

Ron Reid is the son of Dave and Margie Reid. He has been involved full-time with Growing Christians Ministries since 1995, and took over as director in 2012. Ron and his wife, Erica, have two school-aged sons. He is also an active worship leader / guitarist, and a recording engineer for Christian music.
View all posts by Ron Reid →
Previous Post
Next Post