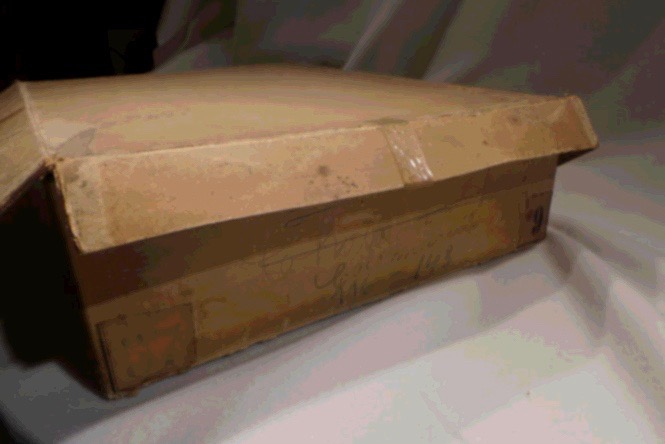 “You’re putting God in a box…”

It’s a phrase I heard dozens of times when I was a kid, but never really understood.
I always pictured an old shoe box… the kind us kids would use if we caught a grasshopper or caterpillar in the yard.  We’d punch some air holes in the top with a pencil, throw in a few handfuls of grass, a twig or two, and our habitat was complete.
I imagined a tiny God in this box — white robe, beard, long hair… the whole deal.  We’d carry Him around like a pet, showing Him off when we felt like it, and hoping He’d act just the way we wanted Him to.
A few years later, my young mind rethought the imagery. This time, the “God box” was bumping down a road in the back of a UPS truck. It was neatly sealed with a “Fragile” sticker on the side. Like some kind of spiritual Amazon Prime, we’d ask for a “delivery of God” only when necessary. We’d order up a miracle if we were desperate… or open up a fresh box of godliness to look good on Sunday morning.

As I grew older, the visual changed yet again. This time it started with a giant chalkboard — the kind in a college lecture hall that covers the whole front wall. The word “GOD” was scrawled in tiny print, barely visible compared to the expanse of dark gray slate around it. A hand-drawn square tightly enclosed the letters, implying that we often restrict the immensity of God’s power to the tight boundaries we draw around Him.

OK, I admit I probably put way too much thought into this God box phrase! But haven’t we all done these things in one way or another?

Paul tells us in Ephesians 3:20 that God can do immeasurably more than we could ask or imagine. But even as we read those words, many of us haven’t fully bought into it. Sure, we believe God is all-powerful, but we don’t really expect to see any “parting-of-the-Red-Sea” type power in our lives — and most of us fail to earnestly ask for it.

So maybe after all these years, the phrase we’ve used so often is actually a bit backwards. We really don’t put God in a box, but rather we put ourselves in a box – sealed with our own doubts and reluctance.

If we’re not pursuing God’s true potential for our lives, it’s time to think outside our box.

“Now all glory to God, who is able, through his mighty power at work within us, to accomplish infinitely more than we might ask or think.” – Ephesians 3:20

Ron Reid is the son of Dave and Margie Reid. He has been involved full-time with Growing Christians Ministries since 1995, and took over as director in 2012. Ron and his wife, Erica, have two school-aged sons. He is also an active worship leader / guitarist, and a recording engineer for Christian music.
View all posts by Ron Reid →
Christians, We Can Do Better
Trick-or-Treating at Willy Wonka’s